In academic ceremonies, the mace is an ornamental staff carried as a symbol of authority. The office of the mace bearer, though purely ornamental, dates back to medieval England when special occasions required the use of a bodyguard. In Colonial America, the mace became a symbol of office when it was used in conjunction with academic regalia.

The Georgia Tech mace carried in today’s ceremony was designed by Cabell Heyward, a former research scientist in the College of Design, and was first used in April 1988 at the presidential installation of John P. Crecine. The mace was made possible by a gift from the Georgia Tech Student Foundation and the Class of 1934.

The primary focus of the mace is its three brass rods, which demonstrate the principle of “tensegrity,” a concept of structure combining tension and integrity developed by R. Buckminster Fuller in 1927. The integrity, or wholeness, of the mace is maintained by each of the rods being held in place by the tension of the steel wire; the rods do not touch one another at any point. 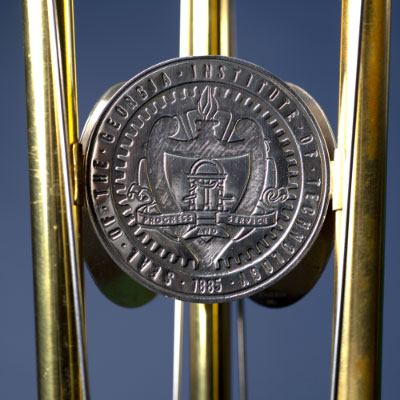 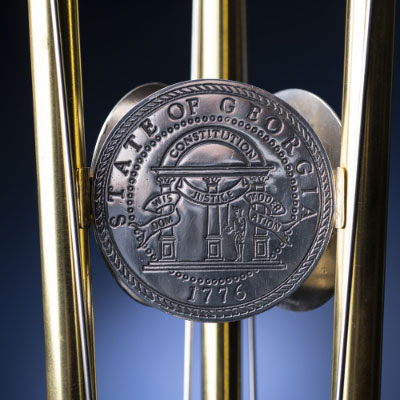 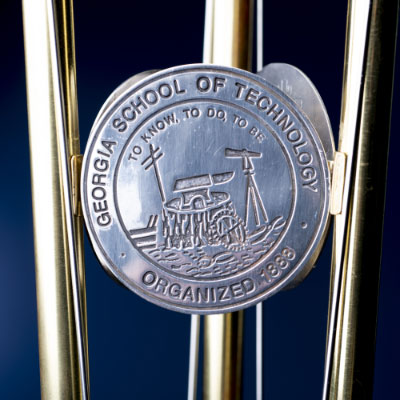 The mace was fabricated by Heyward and Arthur Schoenfeld, another former research scientist in the College of Design, in conjunction with Atlanta jeweler Robert Nagle.

The academic regalia worn by today’s participants is a colorful relic dating back to the Middle Ages, when education was a function of religious organizations. The monks’ habit and the cowl worn over their heads were predecessors of the modern black gowns and hoods. The mortarboard was developed from the skullcaps worn during medieval days by churchmen officiating at religious services.

In 1894, American universities standardized gown styles for the three different types of degrees. Doctoral candidates at Georgia Tech wear customized gold regalia with full rounded sleeves, velvet facings on the front, and velvet bars on the sleeves. Hoods are lined in Georgia Tech’s colors of white and gold. The doctoral hood is distinguished by its blue trim, which is the color representing philosophy. Doctoral candidates also wear a six-pointed tam in the same blue trim. 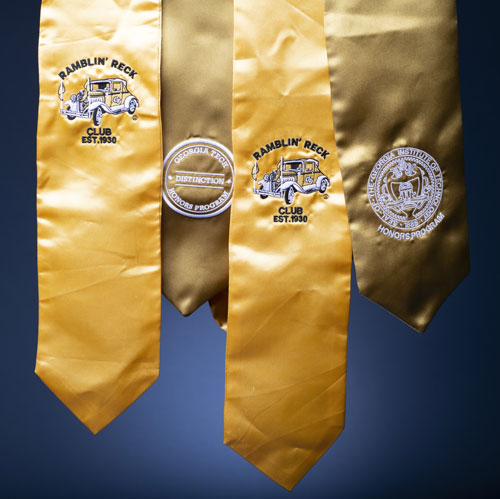 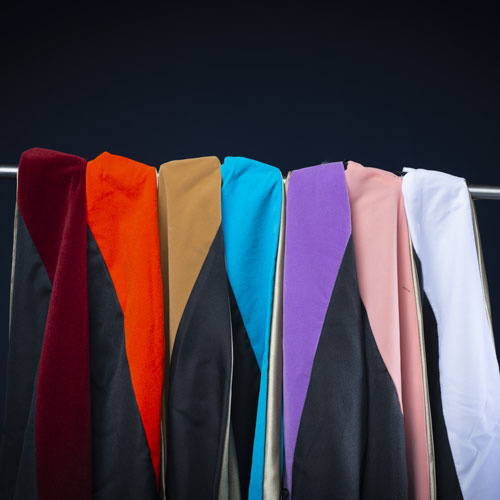 Master’s degree candidates wear the traditional black gown with full-length square sleeves that have a crescent-shaped piece hanging from each sleeve. The gowns are also adorned with the Georgia Tech seal. The master’s hoods are lined in white and gold and are distinguished on the outside by the color of their degree program. Recipients of the bachelor’s degree wear a similar black gown, but with no hood and no additional material at the bottom of the sleeves.

Caps used by master’s and bachelor’s graduates are traditional mortarboards, and tassels are white and gold.

Read more about regalia: "Breaking Down the Cap and Gown"

The bachelor’s degree is the oldest academic degree used by American colleges and universities. The degree, which represents completion of a four-year course of study, was first awarded in 1642 to the graduating class of Harvard College.

The master’s degree represents the completion of one or two years of study beyond the bachelor’s degree. The degree dates back to the oldest universities in Europe, and it usually requires a thesis and an oral examination.

The doctoral degree is the most advan­ced academic degree conferred by American institutions of learning. “Doctor,” which means teacher or instruc­tor, was used as a title in the 12th century to denote men of great learning.

Honor designations are for undergraduates at Georgia Tech who have met the minimum residency hours requirement of 60 hours, as well as the minimum GPA.

The International Plan is a challenging four-year program that works in tandem with an undergraduate’s academic curriculum to produce globally competent citizens. The International Plan utilizes existing study, work, and research abroad opportunities available through the Office of International Education and the Center for Career Discovery and Development.

The Undergraduate Cooperative Education Program is an academic option designed to complement a student’s formal education with paid, practical work experience directly related to the student’s academic major. It is available in all engineering majors, as well as many majors in other colleges at Georgia Tech.

The Ramblin’ Wreck is the 1930 Ford Model A Sport coupe that serves as the official mascot. The Wreck is present at all major sporting events and student body functions. Its most noticeable role is leading the football team into Bobby Dodd Stadium at Historic Grant Field, a duty that the Wreck has performed since 1961.

Legendary Tech icon Buzz made his first campus appearance at a student pep rally in 1980. Over the past four decades, Buzz has gone on to become one of the most beloved — and globally recognized — university mascots.

We recognize the passing of members of the Georgia Tech community with the floral arrangement at the front of the stage.

You are requested to refrain from loud expressions of excitement for individual graduates. Such expressions detract from the recognition due the next graduate in line. Your cooperation is appreciated.